First, a test question:  What is the word FIDO generally thought to be?

You have 30-seconds and there is no prize for a correct answer.  OK, times up and “d” is the correct answer; however, I don’t recommend the movie. For the purpose of this article, the third answer is our focus.

It is an acronym that stands for Fast Identification Online, but I don’t want to jump ahead.  So first we’ll review the problem of vulnerable security on the internet.  Passwords may be the issue and here are the indicators why:1

What is a password?  A very general definition states that a password is a secret word or phrase used to gain admission to something. We know from history that the Roman Army used passwords, also known as watchwords, and had a protocol on how to disseminate them throughout a unit.  Skipping forward, in 1961 MIT used a computer system that requested a password when a “Login” command was issued. In the early 1970’s, password storage security was improved when stored passwords were hashed.  Passwords have been around a very long time.

Many of us have seen the annual worst password lists.  Splashdata reports the top 25 yearly. In 2018 the top 10 were:2

It is sad to note that similar failing approaches to passwords are used over and over again.  So, is it really true to say passwords are the problem or is the mentally lax manner in which we generate passwords the problem?  The fact that this problem continues year after year tells us that we, the computer users, are not going to invest the mental energy to fix this issue.  This historical trend line has spawned an industry working group called the FIDO Alliance.

The FIDO Alliance is comprised of industry leaders from IT, finance and authentication/encryption fields.  There are many members of the FIDO Alliance.  Here are a few, but not all, of the more well-known Board Level Member3:

Note:  While Apple is not currently involved in the FIDO effort, the Apple browser does include FIDO code.

The FIDO Alliance overview states, “The FIDO Alliance is an open industry association with a focused mission: authentication standards to help reduce the world’s over-reliance on passwords.”

To use FIDO to authenticate, you must first register.  The following is a brief description of the process taken directly from the FIDO web site.  This is the short version and, although a few technical terms are used, it is generally non-technical and easy to follow. 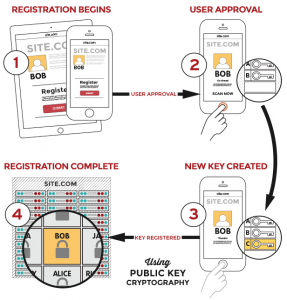 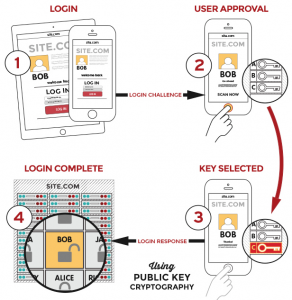 It is important to understand that, “The local unlock is accomplished by a user–friendly and secure action such as swiping a finger, entering a PIN, speaking into a microphone, inserting a second–factor device or pressing a button.”

“The FIDO2 Project is a set of interlocking initiatives that together create a FIDO Authentication standard for the web and greatly expands the FIDO ecosystem. FIDO2 is comprised of the W3C’s Web Authentication specification (WebAuthn) and FIDO’s corresponding Client-to-Authenticator Protocol (CTAP), which collectively will enable users to leverage common devices to easily authenticate to online services — in both mobile and desktop environments.”5

Notice the continuing approach across hardware platforms. The FIDO approach crosses browser platforms to include Edge, Chrome, Firefox and Safari.  Due to the reliance on Public Key Encryption, Internet Explorer is not included and you can expect it to lose mainstream status as well as Microsoft support in the future.

As the old saying goes, “Times, they are a changing.”  How we authenticate into computers, applications and web sites will change.  We will continue to monitor the FIDO Alliance and keep you informed.  Are you ready to make the change away from passwords?